The Latest Fad in Suicide Terrorism 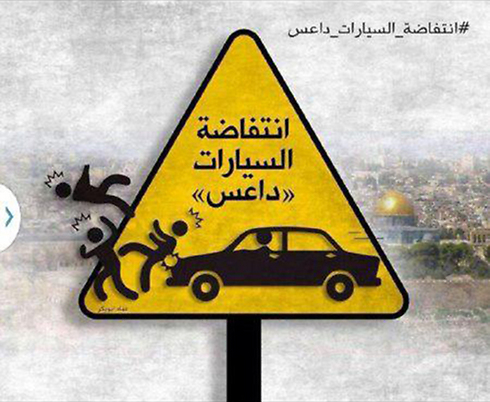 A Palestinian cartoon encouraging more vehicular terrorist attacks against Jews. The Arabic text reads: “Object – even with your car.” Photo by Twitter

Forget suicide bombers.  No more dynamite strapped to someone’s chest and hidden beneath an overcoat.  No more backpacks full of explosives left on a public transportation bus.  I haven’t seen a car bomb lately but in a week’s time I’ve seen three different Palestinians drive their vehicles into a crowd waiting for the next light rail to arrive.  Hey, those other means of suicide terrorism may reappear but for now driving a car or a van into a crowd waiting for public transportation seems to be the new fad in Jerusalem.

Are these Palestinians simply frustrated and feeling oppressed by Israel?  Perhaps, but have you read the Palestinian National Charter lately?   Documented are 33 resolutions of the Palestinian National Council written in July of 1948.  How about this one: Armed struggle is the only way to liberate Palestine. Thus it is the overall strategy, not merely a tactical phase. (Excerpt from #9 of the charter).  What about peaceful negotiations?  Don’t think so.  “Only way to liberate Palestine” does not mean the West Bank or Gaza – it means all the land we now call Israel.

Here’s another one: Commando action constitutes the nucleus of the Palestinian popular liberation war.  (Excerpt from #10 of the charter).  Does this excerpt from #10 call for individual Palestinians to wage war by any means against Israel and Israelis?  Sure sounds that way to me!  But what do I know?  I’m just an observer watching suicide terrorists drive their vehicles into non-suspecting civilians who are waiting for a ride home.  Some get killed, many get injured but all become victims of the latest fad in suicide terrorism.

Is peace between Israel and the Palestinian people really possible?

Ps.11:4-5  ADONAI is in his holy temple. ADONAI, his throne is in heaven. His eyes see and test humankind. ADONAI tests the righteous; but he hates the wicked and the lover of violence (the Hebrew term for violence “חָמָס” is “Hamas”).

← Firecrackers for a Dead Baby
A Compassionately Fought War? →

2 thoughts on “The Latest Fad in Suicide Terrorism”